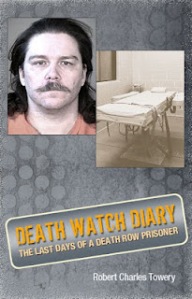 Robert Towery was denied clemency by the state of Arizona on Friday March 2, 2012 and was executed on Thursday March 8th in Florence, Arizona. He was 47 years old.
The last 35 days of his life, Robert was placed on “Death Watch” where his every move was recorded and chronicled by prison officials. Robert kept a diary and he sent his writings to his attorneys. Robert authorized his lawyers to release his diary after his execution.
“Death Watch Diary” is available now as a FREE PDF version at www.deathwatchdiary.com.
A $.99 ebook download on amazon at http://www.amazon.com/dp/B007JD3LUM is available in Kindle format.
In his narrative, Robert picks at the ironies and absurdities of life in prison. He revels in simple pleasures, such as a good meal or a sports event on television. He yearns for the human contact from his last visitors, and he touchingly tries to comfort his pod-mate, who doesn’t really understand that he is going to his death.
As often happens, the man who was executed was not the same man who had committed the crime. Robert had 20 years to think about his crime and once he was free of the drugs and the torment, he became a thoughtful man. Robert apologized to the family of his victim and to his own family both in his clemency hearing and in his last words before his execution.