On October 26, 2004, Dominique Green, thirty, was executed by lethal injection in Huntsville, Texas. Arrested at the age of eighteen in the fatal shooting of a man during a robbery outside a Houston convenience store, Green may have taken part in the robbery but always insisted that he did not pull the trigger. The jury, which had no African Americans on it, sentenced him to death. Despite obvious errors in the legal procedures and the protests of the victims family, he spent the last twelve years of his life on Death Row.

Having delved into the deep end of the prison system, interviewing a man awaiting execution and the family members of his victims in his outstanding 2011 doc “Into The Abyss.” Werner Herzog is set to continue the conversation about the death penalty and those to whom it’s been given in “On Death Row,” a four-part companion series to last year’s film that premieres on the Investigation Discovery channel on March 9th at 10pm.

In an unfortunate instance of timeliness, one of the five inmates he interviews in the series has just been executed. George Rivas, 41, was the leader of the Texas 7, a gang that escaped from a maximum-security prison and went on a crime spree that left one policeman dead, ultimately getting caught after someone spotted them on “America’s Most Wanted.” He was serving multiple life sentences for kidnapping, robbery and burglary charges at the time of the breakout. In the clip from “On Death Row” below, he tells Herzog “I had more time than all mass murderers in the prison system that I know of. They took away all hope for me. When you do that to a person, anything is possible.”

Rivas died by lethal injection on Wednesday. According to the AP, he offered a statement to the family of Aubrey Hawkins, the slain officer: “I do apologize for everything that happened. Not because I’m here, but for closure in your hearts. I really do believe you deserve that.”

The episode featuring Rivas and fellow gang member Joseph Garcia is scheduled to air March 23. Herzog doesn’t support the death penalty, but during “Into The Abyss” demonstrated his ability to highlight its ugliness and find empathy for those awaiting execution while never softening his portrayal of the crimes committed, telling Michael Perry “I don’t have to like you, but you are a human being.”

A defense expert in the hearing of convicted killer Larry Ray Swearingen reluctantly agreed with prosecutors Thursday that histology – the study of microscopic cell tissue – isn’t an accepted method to determine the time of death in a body.

Meanwhile, defense attorney Stephen Jackson accused the state of asking a “trick question” and stressed the science is valid.

“If the (science) was not well-based, it would have been excluded by now (by state District Court Judge Fred Edwards). And that hasn’t happened,” Jackson said.

The hearing, which began Monday in Edwards’ 9th state District Court, was ordered by the Texas Court of Criminal Appeals in July 2011 to hear Swearingen’s claim of innocence.

Like the first three days, the fourth day of the hearing focused on the condition of Trotter’s body when it was found. The defense argued the condition of the body and, more important, microscopic slides of Trotter’s heart and liver, prove she could not have died 22-25 days prior to discovery.

However, during cross-examination of Galveston County Medical Examiner Stephen Pustilnik, the prosecution challenged the validity of histology in determining the postmortem interval – the time from death to when a body is found.

On more than one occasion, Special Prosecutor Lyn McClelland asked Pustilnik to examine several books on forensic pathology and see if Pustilnik could locate “any reference in any book” that connects the use of histology to determine PMI.

The hearing resumes Monday with the prosecution to present its experts.

Larry Ray Swearingen, 40, was sentenced in 2000 to die by lethal injection for the murder of 19-year-old Melissa Trotter of Willis. Since then, he has received three stays from execution. He claims he couldn’t have killed Trotter because he was in jail on Dec. 11, 1998. Trotter disappeared on Dec. 8, 1998 and her body was found on Jan. 2, 1999 in the Sam Houston National Forest. 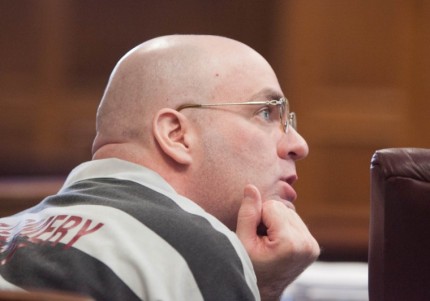 The canopy of trees so prevalent in the Sam Houston National Forest played a role in the condition of Melissa Trotter’s body when found 25 days after her disappearance, a meteorological expert testified Thursday.

However, Grant, an expert on microclimate, said the solar heat is diffused as it works its way to the forest floor.

Approximately 20 percent of the solar energy reaches the bottom of the forest, he said.

Questioned by prosecutor Warren Diepraam, Grant testified the temperatures on a forest floor tend to be more consistent than in a more open environment.

“The heat transfer is lower,” Grant said. “The temperature of the (forest) can’t be the same as an open field.”

Testimony in the hearing is expected to conclude today. Edwards may issue a ruling or send all evidence and testimony to the TTCA. Either way, a determination is not expected before a couple of months.

The battle of the experts continued Wednesday at the hearing of convicted killer Larry Ray Swearingen.

Forensic Entomologist Neal Haskell testified under cross-examination that he could extract a time of death based on DNA, weather data and autopsy photographs.

Prosecutor Warren Diepraam asked Haskell if the forensic evidence he was shown Wednesday was consistent with the condition of Trotter’s body found 25 days after her disappearance.

Later in the day, Sibyl Bucheli, of Sam Houston State University, was called to the stand to testify about the decomposition of the human body.

Bucheli said data obtained at SHSU proved to be “entirely” consistent with the decomposition of Trotter’s body, Diepraam said.

“She (Bucheli) showed (Trotter’s) internal organs didn’t turn to mush as the defense alleged,” he said.

“She just received a PhD in Philosophy from Ohio State,” Jackson said. “She cherry-picked a body (at SHSU) that is not consistent with 17 days of 20-degree weather when the temperature was up in the 70s. It’s apples to oranges.”

The hearing is expected to conclude today.

The former Harris County medical examiner who conducted the autopsy in the Larry Swearingen murder case testified on Tuesday that his attorney misrepresented her opinion.

Dr. Joye M. Carter said during an evidentiary hearing that she did not reverse her opinion concerning how long Melissa Trotter‘s body had been in the Sam Houston National Forest, as Swearingen’s attorneyJames Rytting claimed in a 2007 affidavit.

Swearingen received a stay of execution after Rytting cited the affidavit in an appeal. He is on death row for the strangulation and sexual assault of Trotter, 19, who went missing on Dec. 8, 1998, from Lone Star College-Montgomery. Her body was discovered 25 days later.

During the 2000 trial, Carter testified the body had been in the woods for 25 days or so, placing the time of death on Dec. 8.

But Rytting tried to get Carter to say the wording in the affidavit indicated that the body was in the woods a maximum of 14 days, placing the time of death on or after Dec. 12.

Swearingen contends he could not have killed Trotter because he was in jail on Dec. 11 on an unrelated charge.

The hearing will determine whether Swearingen should receive a new trial.

The report, to be formally announced today, faults the state for:

* not holding on to DNA evidence for as long as a person is incarcerated;

* not having clear requirements for recording depositions;

* not providing two attorneys and an investigator for defendants in death-penalty cases and appeals;

* and requiring that a defendant’s mental disability be documented — as opposed to just manifested — before they reach 18.

The report, “Evaluating Fairness and Accuracy in State Death Penalty Systems: The Missouri Death Penalty Assessment Report,” was conducted by a team of eight Missouri law professors, attorneys and judges with varying views on the death penalty. It looked at a dozen key areas that affect who is executed by the state and how fairly such punishment is meted out.

“The ABA doesn’t take a position on the death penalty itself but calls for states to impose a moratorium if certain problems have not been corrected,” said Virginia Sloan, chair of the ABA Death Penalty Moratorium Project.

The Missouri report is part of a second wave of such reports that have looked at the death penalty in Alabama, Arizona, Florida, Georgia, Indiana, Kentucky, Ohio, Pennsylvania and Tennessee since 2003. Funding for all the reports came from the European Union, which strongly opposes the death penalty.

The report said the state’s “areas of strength” were its accreditation of crime labs, provision of defense services, trial instructions to jurors in capital cases, the independence of its judiciary and its treatment of “mentally retarded” offenders.

Legislation in Missouri was introduced at the beginning of this year by Rep. Mike Colona, D-St. Louis, to hold off on executions in Missouri until a statewide report can be completed.

Every day, you find the latest news on the death penalty, I will group the most important news I have read in the media.