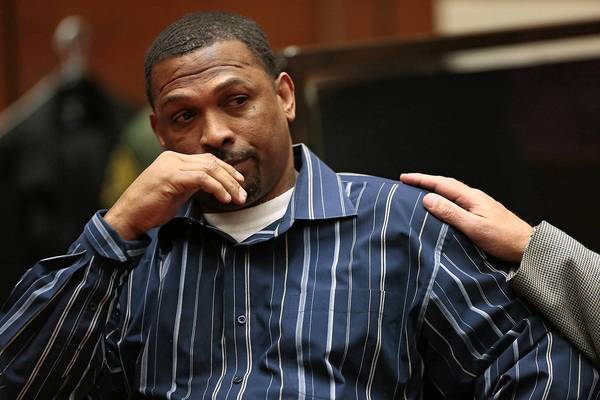 Jurors decided Monday that a gang member should be executed for the slaying of four people, including a 10-year-old boy gunned down from close range as he rode his bicycle along a quiet South Los Angeles street.

Charles Ray Smith, 44, stared straight ahead and showed no emotion as the verdict was read in a downtown courtroom.

Smith was convicted during a previous trial of taking part in two deadly shootings in 2006, including one that became known as the “49th Street Massacre” in which two men wielding AK-47s opened fire on children and adults enjoying a Friday summer afternoon.

Sergio Marcial Sr., whose son and brother were among those killed, said the trials in the case had taken an emotional toll on him and his family. He said one of the most painful moments during the legal proceedings was seeing an autopsy photograph of his slain son.

His oldest son, who was 12 at the time, was seriously wounded in the attack and had to repeatedly recount his ordeal in court.

“I’m glad that we can move on and not worry about going and hearing how my son got killed — and my brother and my neighbor,” Marcial said. “I’m glad that it’s over.”

Defense attorney James Cooper said he and his colleague, James Bisnow, knew the case would be difficult given the age of the victims and the fact that none had any gang ties. Bisnow noted that his client has gone through four trials, including one in which a jury deadlocked on whether Smith was guilty and two more that could not decide if he should be executed or spend the rest of his life in prison.

“It was an unprecedented fourth trial, which is extremely costly to the taxpayer and was unjustified in view of the mitigating evidence,” Bisnow said.

The brutality of the 49th Street killings shocked a city long used to gang violence. The shooting was one of several high-profile gang crimes that stoked fears among some of a possible race war. Witnesses described the gunmen as black; the victims were Latino.

But prosecutors have argued that race had little to do with the killings and that Smith and another man, Ryan T. Moore, mistook the victims for rival gang members in a tit-for-tat feud over turf, drugs and pride. Moore was convicted during a separate trial and sentenced to death.

Smith’s attorneys urged the jury last week to spare their client, arguing that there was a lingering doubt that he was involved in the killings. They said jurors should also consider a variety of disorders from which Smith suffers, including post-traumatic stress disorder brought on by his upbringing. They said his afflictions warped Smith’s view of the world, impaired his logic and made him react impulsively.

Smith, they said, was raised by parents who were heavy drinkers when he was a child and who were addicted to crack cocaine when he was a teenager. All four of his brothers ended up in jail or prison, the attorneys told jurors during closing arguments.

The lawyers also noted that many of Smith’s relatives testified that he was a loving father who encouraged his children to do well in school.

Smith’s killings, Ashvanian said, began in March 2006 after an incident in which a rival gang member in a green sedan shot at one of Smith’s friends. In response, Smith used an AK-47 to shoot Bani Hinojosa, 27, in the back. Hinojosa, a construction worker who had been sitting in his green sedan, was bringing milk home to his wife and daughters. He had no gang ties and had nothing to do with the earlier shooting involving Smith’s friend.

The victims of the 49th Street shooting on June 30, 2006, were David Marcial, 10; his uncle, Larry Marcial, 22; and Luis Cervantes, a 17-year-old neighbor. David’s brother, Sergio Marcial Jr., was seriously wounded. He and David had been riding their bicycles on the sidewalk outside their home.

Maribel Marcial, David’s aunt and Larry’s sister, said she and her family would have accepted a verdict of life in prison for Smith but were gratified by the jury’s decision.

“It is the beginning of healing for all my family,” she said after the verdict. “We’re all going to die. But in this matter, he’s going to pay for what he did. He’s going to know the reason that he is dying.”