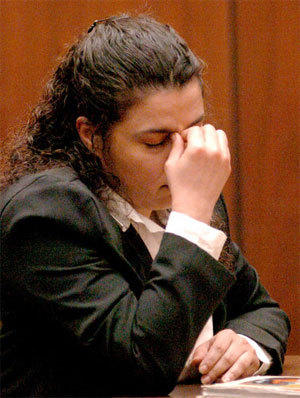 SAN FRANCISCO — The California Supreme Court unanimously upheld the death penalty Thursday for a Montebello woman convicted of murdering her husband for life insurance and implicated in the choking death years earlier of her baby daughter.

Angelina Rodriguez fatally poisoned her husband, a special education teacher, by serving him drinks laced with oleander and antifreeze in 2000, a few months after persuading him to take out joint life insurance policies, the court said.

It was her second attempt, according to the ruling written by Justice Ming W. Chin.  She had previously tried to kill him by loosening natural gas valves in their garage, the court said.

During her murder trial, the prosecution also presented evidence implicating her in the 1993 death of her 13-month-old daughter, Alicia. Rodriguez was married to another man at the time.

The baby died after choking on the rubber nipple of a pacifier. Two months earlier, Rodriguez had taken out a $50,000 life insurance policy on the baby—without her then-husband’s knowledge—and made herself the beneficiary, the court said.

Rodriguez and Alicia’s father also sued the manufacturer of the pacifier, which had been recalled based on five consumer complaints that it had broken apart. The company paid a $710,000 settlement.

While behind bars for the murder of her husband, Rodriguez  tried to dissuade a witness from testifying against her, the court said. The jury convicted of her interfering with the witness but failed to reach a verdict on a charge that she tried to have the witness murdered.

In challenging her conviction and sentence, Rodriguez argued, among other things, that the jury should not have been told she killed her daughter.  Rodriguez was not charged or convicted in connection with the death, but law enforcement reexamined it after the poisoning of her husband.

The court said the jury was entitled to hear about the child’s death during the penalty phase of deliberations.

“There was ample evidence that defendant murdered her daughter,” Chin wrote.

Karen Kelly, who is representing Rodriguez on appeal, said she would ask the U.S. Supreme Court to review the decision.