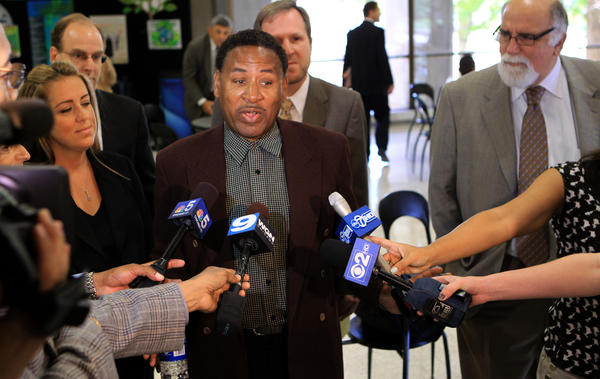 Lake County prosecutors have dropped rape charges against Bennie Starks, who spent 20 years in prison before DNA pointed away from him.

“He is a free man and he is not guilty,” said Starks’ lawyer, Jed Stone.

Starks, dressed in a burgundy sport coat and black and white checked shirt, accepted a hug around the shoulder from another of his lawyers, Vanessa Potkin from the New York-based Innocence Project.

“This has been a great day,” Starks said.

As to his plans, he said, “Spend time with my grandkids and just…living.”

Starks, 52, of Chicago was convicted in 1986 of raping a 69-year-old woman in Waukegan. He was in the middle of a 60-year sentence when the appeals court ordered a new trial in 2006 and he was released on bond. As with three other recent Lake County cases, prosecutors insisted on his guilt even after DNA pointed toward someone else as the attacker.

The possibility of a retrial had been thrown into doubt by court rulings barring prosecutors from using the testimony of the victim, who identified Starks as the rapist.

She died several years ago, and a Lake County judge ruled in January 2011 that prosecutors could not use her past testimony at the retrial.

The state appeals court affirmed that decision in February, writing that Starks’ lawyers would not have a fair shot at cross-examining her and holding that the original cross-examination was inadequate.

Since February’s ruling, Starks has waited to learn whether prosecutors planned to retry him.

After the conflicting DNA evidence became public in the early 2000s, prosecutors responded much as they did to other cases involving forensic evidence suggesting a suspect’s innocence.

Prosecutors argued that the DNA did not clear Starks because the woman could have had consensual sex with someone else, although she said at trial she had not had sex in the weeks before the attack.

The woman identified him as the man who pulled her into a ravine and beat, bit and raped her. A dentist said bite marks on the victim matched Starks, and his jacket was found at the scene.

Starks said the jacket and money were stolen from him after he passed the evening in a local tavern, and the defense attorneys have called the scientific rigor of the bite-mark evidence into question.

In the early 2000s, testing turned up a genetic profile from another man on the victim’s underwear. Later, testing on a vaginal swab found DNA that didn’t come from Starks, and the appeals court ordered a new trial in 2006.

This morning, it first appeared that Starks’ wait to have his name cleared might continue.

Newman, the assistant state’s attorney, surprised Starks’ defense lawyers at the start of today’s hearing when, instead of immediately dropping the charges, he asked for a continuance while the appeals court considers Stark’s challenge to his battery conviction. Starks hopes to see that conviction — which stems from the same crime — wiped from his record.

Without pause, Judge John Phillips tersely declined that request and told prosecutors to make a decision on retrying Starks immediately. Newman left court for a few minutes to consult with his superiors, then returned to begin filling out paperwork for Starks’ case before the judge returned.

Stone, one Starks lawyers, approached Newman as he filled out a court form and smiled as he said, “That’s N-O-L-L-E,” a reference to the Latin phrase, nolle prosequi, which indicates a prosecutor is dropping charges.

When Phillips returned, Newman dropped the charges and hurried from the courtroom. He declined to comment on the decision.